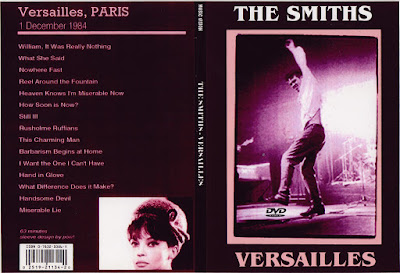 I really don't know much about this video but it doesn't appear to be up here so I thought people may be interested. I picked up the DVD on Bleeker Street in New York City. It has a soundboard audio source and was apparently a TV broadcast. The songs are tracked and there is a menu. The intro to Handsome Devil is cut. I'm including the original artwork. There are video edits that remind me of the 80's in all it's cheesy glory. If you're a Smiths fan you'll want it. If you're a Moz fan, hey, he sticks his tongue out and exposes a nipple or two.

To put an end to a very busy year, the Smiths returned to Paris for a one-off concert. This is often credited as having taken place in the Parisian suburb of Versailles, but the venue was actually a hall at the Parc Des Expositions, near the Porte de Versailles in the south of Paris. The setlist was similar to the ones from the recent Irish dates, minus "Please, Please, Please, Let Me Get What I Want" and "Jeane". All five then-unreleased songs that would appear two months later on "Meat Is Murder" as well as recent single tracks "William, It Was Really Nothing", "How Soon Is Now?" and "Heaven Knows I'm Miserable Now" were performed.

The concert went down well, but perhaps because the Smiths were not as known in France as in the UK, the audience took some time to warm up to the band. After the opener "William, It Was Really Nothing", Morrissey greeted the crowd "Thank you we are the Smiths and we come from England... what?". He wasn't as talkative in France as he was in England or Ireland, probably because of the language barrier. At the end of "Nowhere Fast" he lied on the floor to illustrate the song's final line "I'd lie down and die". The next song on the programme was then introduced "Thank you, this is a song called 'Reel Around The Fountain'."

After "Heaven Knows I'm Miserable Now", Morrissey thanked the audience and introduced the next song: "Thank you... thank you, you're very kind, thank you... This is a song called 'How Soon Is Now'." Near the end of "Still Ill" he fell on the floor and writhed. The following song was then introduced "This is a new song which you don't know, it's called 'Rusholme Ruffians'." It segued into "This Charming Man" the way it always did since its live inception in September. This was to be the last of the few times this medley was performed.

During the bass solo at the end of "Barbarism Begins At Home" Johnny, who had nothing to do, pretended to yawn and started dancing along while Morrissey was 'oscillating wildly' near him, arm flying everywhere. Near the end of a very spirited "Hand In Glove", Morrissey removed his shirt gradually, swung it around for a short while then threw it in the crowd. He said "Goodbye... thank you... we love you..." and the Smiths left stage. They were soon called back and Morrissey thanked the audience "Thank you France, we didn't expect this, thank you". The first encore consisted of a playful "What Difference Does It Make?" with added "Ba-bada-bada" and "Handsome Devil". The band was then asked to do a second encore, and they went for "Miserable Lie" after thanking the French again for their welcome: "What could we say? Thank you..."

This concert was recorded and broadcast on television.
The image quality is good, but this was filmed from one main angle and very few variations. There is also a lot of annoying video effects that can't really be blamed on the fact that it was the 1980s. It is only one of two visual documents for the Smiths in 1984 so despite all this, still very interesting to watch on bootleg video or DVD.
Pubblicato da EDGE a 19:33