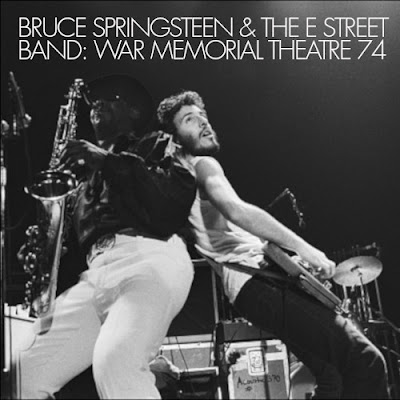 Audience Recording (equipment unknown) by The Big A

mbrown02's recent repost of Trenton '74 reminded us that we were sitting on an alternate recording of the show. In fact, based on the data on Brucebase and to the best of our knowledge (though CB and JK might know better), Trenton may well be the first Springsteen show ever to be recorded by two different tapers, therefore making it the first two-source Bruce gig ever.

The Big A recorded Bruce several times in 1974-75, most notably the wonderful Philadelphia 11/1/74 recording and the earliest known capture of Max and Roy in the band from Kean College, 9/22/74. While he did not have high-end equipment, he got a very solid result here, arguably as good as Kivak's previously circulated recording. Samples provided.

Not surprisingly, however, neither tape is complete, as the Big A missed the end of the show. We've added the missing songs from Kivak's master to the Big A recording, as well as patching Kivak's "Kitty's Back" (which is cut on Kivak's master), using the Big A source, for a bonus track. The result is two baseline recordings of the show, each made complete by patches from the other.

Needless to say this is a fantastic show from an other worldly era in Springsteen's career. It includes an early cover of Dylan's "I Want You," a jaw-dropping "New York City Serenade" and the embryonic "Jungleland" with Suki Lahav on cello to name but a few highlights.

Thanks to The Big A for lending JEMS his masters. It isn't easy to find new sources circa 1974-75 and he has provided several. Also big ups to mjk5510 for assembling this and doing the final release prep.