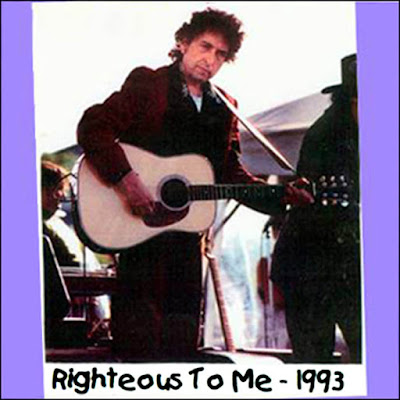 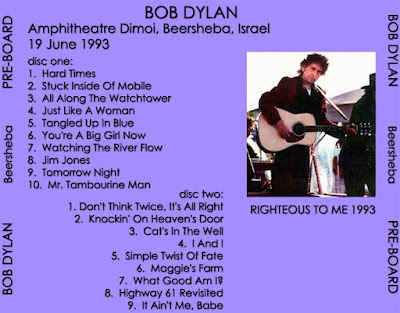 (RTM Pre-Board FLAC)
Bob Dylan
Amphitheatre Dimoi
Beersheba, Israel
1993 June 19
Lineage:
Unknown CD-R>EAC(secure)>FLAC Frontend>FLAC
Bob Dylan (vocal & guitar)
Bucky Baxter (pedal steel guitar & electric slide guitar)
John Jackson (guitar)
Tony Garnier (bass)
Winston Watson (drums & percussion)
Disc 1
01.Hard Times (Stephen Foster)
02.Stuck Inside Of Mobile With The Memphis Blues Again
03.All Along The Watchtower
04.Just Like A Woman
05.Tangled Up In Blue
06.You're A Big Girl Now
07.Watching The River Flow
08.Jim Jones (trad. arr. by Bob Dylan)
09.Tomorrow Night (Sam Coslow/Will Grosz)
10.Mr. Tambourine Man
Disc 2
01.Don't Think Twice, It's All Right
02.Knockin' On Heaven's Door
03.Cat's In The Well
04.I And I
05.Simple Twist Of Fate
06.Maggie's Farm
07.What Good Am I?
08.Highway 61 Revisited (Cuts at 00:29, end of line source)
09.Highway 61 Revisited (alternate audience source)
10.It Ain't Me, Babe (alternate audience source)
Another from the "Righteous To Me" box. One listen to "Jim Jones" from this show is all the evidence necessary to make the case for the value of these newly circulating '93 recordings. Thanks again Matt!!
This is a Pre-Board from the RTM box set, that means it is a line recording, probably hooked to a sound monitor, but it is not a soundboard (SBD) recording in the sense that it does not represent the feed going out to the audience. It frequently emphasizes several instruments and/or vocals at the expense of others. Most of the RTM box set recordings have Dylan's vocals up front, but often they are recorded too hot and have volume fluctuations as the taper tries to compensate. Some of them, however, are excellent recordings.
Pubblicato da EDGE a 05:28