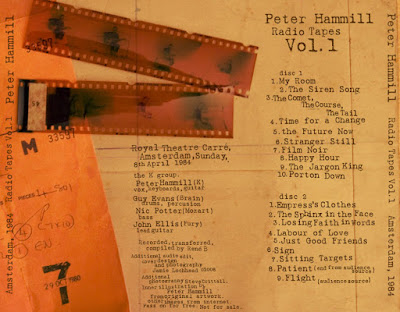 (FM broadcast FLAC)
Peter Hammill & K Group - Radio Tapes Collection Volume 1 -Upgrade- (FM Broadcast)
Peter Hammill, and the K group
Radio Tapes Collection Volume 1 (Upgrade)
Royal Theatre Carré, Amsterdam
Sunday, 8 April 1984
Complete performance.
FM broadcast, 1st generation tape source.
Except the end of 'Patient' and the whole of 'Flight'
from an audience recording.
CD1
01.My Room
02.The Siren Song
03.The Comet, The Course, The Tail
04.Time for a Change
05.The Future Now
06.Stranger Still
07.Film Noir
08.Happy Hour
09.The Jargon King
10.Porton Down
CD2
01.Empress’s Clothes
02.The Sphinx in the Face
03.Losing Faith in Words
04.Labour of Love
05.Just Good Friends
06.Sign
07.Sitting Targets
08.Patient
09.Flight
With the K group.
Peter Hammill (K) - guitar, piano, vox
John Ellis (Fury) - guitar
Nic Potter (Mozart) - bass
Guy Evans (Brain) - drums, percussion
Please note that this is completely new set of Flac files.
Notes on the upgrade, done with Rene's permission.
I have removed glitches and clicks from the original recording, especially in Flight which had some very harsh clicks. There are a few less harsh clicks towards the end, but I was unable to isolate these from the vocals and cymbals.
Rene supplied a complete audience recording of 'Patient' which I have mixed into the end of the track to complete it, and also back mixed the atmosphere from the audience section for a few seconds to make the transition less noticeable.
The audience noise has been made continuous and any DJ talk removed.
The tracking has been changed so that each track mark is at the start of the music.
I have made new artworks for the recording which can be downloaded at:
http://www.zen164487.zen.co.uk/phrt1.html
or by browsing at:
http://www.jamielochhead.co.uk/ (where my website is moving to)
Please respect the copyright on this design. Additional credits are on the back insert.
Rene and I are working on further upgrades of all five volumes of the Radio Tapes series, and may extend this to other recordings.
Lineage: original torrent:
recording date(s): 1984
lineage: FM radio --> Denon HX Pro Tape deck, Maxell MC tape Dolby C --> Pioneer CDr recorder --> WAVE --> FLAC
additional audio edit in Soundforge to remove clicks, glitches, to cross fade audience noise and remove any DJ talking:
--> Wav --> Soundforge --> Flac (level 8, sector boundary aligned, verified)
Rene's notes from the original torrent:
In 1997 I had made for friends and myself a series of CDr called the Peter Hammill Radio Tapes Collection. This consisted of transferring the best (FM) of own Hammill tapes to CDr. Mostly these recorded by myself from Dutch or British radio. Though these were for friends only, it’s now sometimes being sold as bootleg. The series consisted of 5 volumes and I had made some simple artwork at the time (using PowerPoint).
...
This Volume 1 also remains a fave of mine bacause a) first Hammill show though I'd been buying VdGG/PH since 1977 and b) excellent FM sound quality (better then the well known bootleg of this gig): Utrecht, Vredenburg 1985.
From the 1997 “artwork”:
Amsterdam, Sunday 8 April 1984, the famous Royal Theatre Carre:
This was my very first Peter Hammill Live Experience and I bit the bullet for the second time. KRO radio broadcasted nearly the entire show. This is a first generation copy with unsurpassed sound quality(helas not for Flight: there are only audience recordings). There also exists a very good bootleg CD -A Stranger Still- which however lacks the last three songs included here.
Pubblicato da EDGE a 20:08