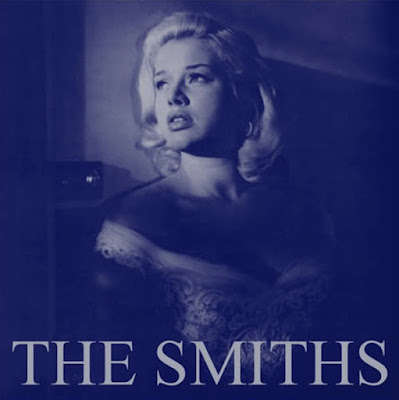 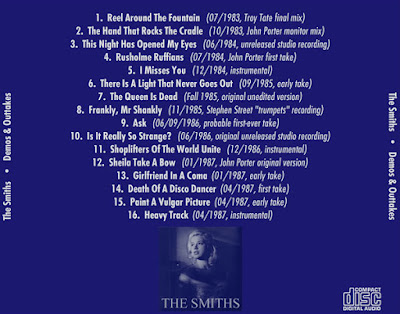 01 Reel Around The Fountain (July 1983, Troy Tate final mix)
This song features some of the chimingest (is that a word) guitars I've ever heard Marr create. It's simply beautiful. Smiths authority Simon Goddard thinks this is the best recording of this track the band did, and I agree; the stereo version "unhides" some of Johnny's background chiming guitars to spectacular, beautiful effect that nearly all previous bootleg sources of this track completely obscured or hid behind walls of tape hiss. This version here? Can be released today, by Warners, lifted direct from this blog. It's *that* good of a transfer and mastering. All evidence (except for, err, a test pressing indicating otherwise) indicates this actual recording featured here was to be the Smiths' 2nd single, famously withdrawn at the last second once the band wrote "This Charming Man". See Extra Track for more details.

02 The Hand That Rocks The Cradle (October 1983, John Porter monitor mix)
Not much different from the final LP version, a monitor mix is a rough-and-ready mixdown done at the recording desk, mainly used by the band (and producer) to see what needs tightening/redoing (if anything) prior to the final mixdown. This completely lacks the gentle acoustic rhythm guitar track pervasive through the final LP version as well, though it does emphasize the lovely, simple, emotive Marr electric track. I think I prefer this to the final LP version; it's subtlety wins it for me.

03 This Night Has Opened My Eyes (June 1984, unreleased studio recording)
The only released version of this song was recorded in September 1983 for a Peel session, at the BBC. For whatever reason the band chose to record a full-blown studio version in June 1984 during the "William, It Was Really Nothing" sessions, but never did anything with it (it was meant to be a B-side along with the July '84 "Rusholme Ruffians" recording, backing a proposed-yet-binned "Nowhere Fast" single which also was recorded in June/July 1984). If anything, time gave Moz a chance to get a bit more confident with his vocal, but it's not significantly different overall besides being a bit faster. Still a nice find though...

04 Rusholme Ruffians (July 1984, John Porter first take)
Goddard says the band originally attempted this in July 1984, several months prior to the main Meat Is Murder sessions. The very first July 1984 take stretched to nearly 7 minutes long, was much more rough/ready, and much more skiffle/rockabilly than the final MIM track. Moz's vocal is really rough around the edges, it doesn't sound like he's fully worked out the melody or his phrasing, and the lyric itself isn't as tight as it would become. Based on this it can only be assumed the version here is the very same first take mentioned by Goddard. I absolutely adore Marr's unique electric guitar playing on this version; it's got a nice "crunch" that adds a lot to this track that is missing on all other attempts.

05 I Misses You (December 1984, instrumental)
The first truly unheard song on this bootleg, this was recorded during the final mixdown sessions for the Meat Is Murder LP. Goddard surmises that this may have even featured a Moz lyric at one point, but this is only supposition. A track that the band binned, honestly while interesting as any "new" Morrissey/Marr track might be, it would be moreso with a Moz lyric and is mostly forgettable. I hear strong echoes of "Heaven Knows I'm Miserable Now" in Marr's melody and guitar phrasing; perhaps it was binned for being too similar to that song?

06 There Is A Light That Never Goes Out (September 1985, early take)
A very early run-through with a relatively-confident Moz vocal, though it does feature the subsequently-omitted defining lyric "there is a light in your eye and it never goes out" during the final refrain. Missing most of Marr's overdubs, musically it sounds like a rough monitor mix of the basic Marr/Rourke/Joyce instrumentation, with the added synthetic string bits on the Emulator. Am I the only one who finds myself humming (in my head) the missing orchestral bits that are on the final LP version, but conspicuously absent here? Doubtful...

07 The Queen Is Dead (Fall 1985, original unedited version)
Well, if the subtitle doesn't nail it down... the final album mix had several instrumental sections edited out at the last minute by the band and Stephen Street, as they felt it went on a tad too long. This is the full-calorie version.

08 Frankly, Mr Shankly (November 1985, Stephen Street "trumpets" recording)
The story has it that when this song was recorded during the main sessions for the Queen Is Dead LP, with Street, there was a technical problem with the master reels for this track, necessitating an emergency call to John Porter to engineer an 11th hour re-recording in December 1985. What wasn't discovered (at least publicly), until Goddard dug it up, was that the "technical problem" was a bizarro trumpet part on the track. It does introduce an additional element of hilarity, but the final Porter recording nails it in my book (while I really do like the trumpet, I think the band as a unit just killed it with Porter as compared to this Street attempt).

09 Ask (9 June 1986, probable first-ever take)
A very early, if not the first if Goddard's correct, run-through of this track missing most of the chiming/jangly guitars. This is a basic rough-and-ready bash it out take recorded by John Porter, with Marr and Gannon going at it on the rhythm guitars and Joyce getting all frenetic on drums. Wisely, a lot was tightened up as the session progressed; alas, this isn't the hoped-for "pre-Steve Lillywhite mix" fans wanted (which sadly, according to Porter, doesn't exist because he never actually got the opportunity to mix it before Lillywhite got his hands on it and didn't understand the complex web of guitars Porter had built up).

10 Is It Really So Strange? ( June 1986, original unreleased studio recording)
Another track which has its only released version being a BBC session version, the known-and-loved release variant was recorded in December 1986 for John Peel at the BBC. Interestingly though, they did have a fully-recorded, mixed, release-ready take in the can, recorded during the "Ask" sessions in June 1986. For whatever reason it remained binned, to the point when it came time to select B-sides for the "Sheila Take A Bow" single in spring 1987, the band went to the (admittedly superior) Peel recording rather than the June 1986 studio take. This version is a bit more shimmery than the common version, and Marr's guitar is a bit more rhythmically choppy than the BBC take. The song, good in the original mono leak, jumps to life in this stereo version. I love this!

11 Shoplifters Of The World Unite (December 1986, instrumental)
Goddard doesn't go into much detail into this track's session history, unfortunately. It's an instrumental, with some additional Marr-riffic guitars that are either obscured or wiped from the final recording, presumably due to Moz laying down his vocals on top. I do like Rourke's bass on this version however.

12 Sheila Take A Bow (January 1987, John Porter original version)
One of the more famous episodes in Smiths session history, this song was originally produced by John Porter, signed, sealed and delivered, ready to go. Then for whatever reason the band had a rethink, decamped to another studio with Stephen Street, and re-recorded the song (sampling some of Porter's guitar work in the process, to save time - which miffed Porter, understandably, since they never asked for permission). This original version is much more jangly, with Porter on emulated sitar, while the final Street take is all T.Rex'ed out. Honestly, I'd have to say I prefer the Street version, though that could be due to familiarity more than anything else (as I usually love Porter's stuff with Marr). That said... the stereo transfer here brings yet another track to life; Marr's zingy guitars are *all* over the stereo field and it's really a wonderful recording. It's almost as if Porter knew this was the last time he'd be working with the band (it was), so he had Marr lay down 30 times more guitars than normal as a parting gift. Sounds really spectacular in headphones.

13 Girlfriend In A Coma (January 1987, early take)
While in studio with Street in January 1987 re-recording "Sheila Take A Bow", the band took the time to lay down a couple takes of this track (prior to the main Strangeways, Here We Come LP sessions in April 1987). What sets this apart from the Strangeways version is the pronounced reggae-ness of the instrumentation (no, there aren't any steel drums). Goddard says the first two takes of this from the January '87 sessions featured this Jamaican interpretation, which we have here, and Moz's vocal is a bit rough around the edges (of course he'd tighten it up later on).

14 Death Of A Disco Dancer (April 1987, first take)
The find of the lot, in my book. This is markedly different from the final Strangeways LP version, in that you can a) hear the song actually being structurally formed as it progresses, and b) Moz is audibly excited at the suspense and greatness of the track, this being the band's first run-through of it in studio, as per Goddard. All the musicians are in perfect synch with each other, you can just feel the bond between the members, as the song plays out. It's for things like this that I love the behind-the-scenes aspect of the recording business. If this were the only track leaked, I'd be happy.

15 Paint A Vulgar Picture (April 1987, early take)
Goddard says that this track went through several run-throughs before the final Strangeways LP version, with entire Moz verses being chopped out. This doesn't feature the "missing Moz" verse which was compensated for by Marr's solo over that section on the final LP version, but it does feature some unheard Mozwork with the title itself part of the lyric. If I read Goddard right, this take we have here would have been one of the very earliest ones.

16 Heavy Track (April 1987, instrumental)
The second of the truly unreleased compositions on the set. Apparently this was recorded at the very beginning of the Strangeways sessions, before Moz turned up at the studio. It's the most musically different Smiths track of any of them, for all intents and purposes it sounds like Zeppelin (I can imagine Robert Plant wailing on top of it). Nothing shocking, nothing you'll kill yourself for not hearing over the past 23 years, it's still a nice one to have.
Pubblicato da EDGE a 23:23