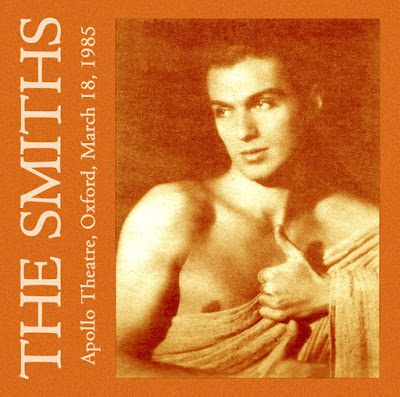 ++ Nowhere Fast”,” Stretch Out and Wait”, and “Shakespeare’s Sister” appear on the CD single for “That Joke Isn’t Funny Anymore”, as well as the Dutch Import single for “The Headmaster’s Ritual”
++ ”Meat Is Murder” is also included on the UK edition of the compilation ‘Animal Liberation’
++”Miserable Lie” Appears on the Rough Trade compilation called ‘Compilation’
”What She Said” was not broadcast, but appears on the NME compilation 7” called ‘Poll Winners’
>were never broadcast<

While this has become a popular bootleg over the years, and songs have been plucked from it several times for official releases, this is the first time this source has ever seen circulation.

Broadcast and taped by me from the WLIR Tuesday Night concert series. The only information they gave that night was ‘recorded during the British tour, 1985, but thanks to the internet, I was able to establish the correct date and venue.

According to the “Passions Just Like Mine” Smiths page, all known broadcasts feature an alternate “You’ve Got Everything Now” from a different, unknown date, even though the song was in the setlist this night, and was played in the order listed...I’ll go with the site for that info...He’s seems to have his info tight...

Also according to the page, “How Soon is Now” is edited by 1 minute on all the broadcasts...though I don’t really hear it, I’ll go with the site on that as well...

Aside from the unfortunate tape flip, and the first :30 secs of the tape where the DOLBY button was pushed in, the rest of the tape is pretty flawless. Perhaps it will be just another copy you have of this popular bootleg, perhaps it will upgrade an old copy, perhaps you’ve never heard it before...whatever the case may be...
Pubblicato da EDGE a 20:40