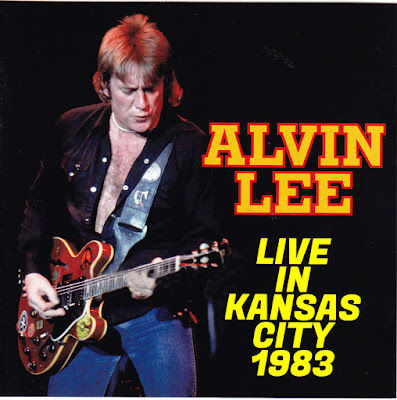 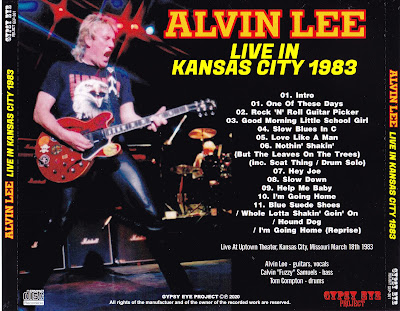 (Soundboard FLAC)
Alvin Lee
March 18th, 1983 (Friday)
Uptown Theater
Kansas City, Missouri
Stereo Soundboard from The Kevin Davie Collection
Lineage:
unknown source > Kevin's trade tape (TDK SA 90) > Modified Sony TC-WE475 (azimuth adjusted, Dolby off) > Zoom H1 @ 24/48 > .WAV > Wavepad Masters Edition (tracking) > flac (8) via TLH
01 One of These Days
02 Rock 'N' Roll Guitar Picker
03 Good Morning, School Girl
04 Slow Blues in 'C'
05 Love Like a Man
06 Nothin' Shakin' (But the Leaves on the Trees)
07 Hey Joe
08 Slow Down
09 Help Me Baby
10 I'm Going Home
11 Whole Lotta Shakin' Goin' On > Hound Dog > I'm Going Home
Setlist: 01:16:48
This sounds like a house feed or P.A. mix. At first there is very little bass guitar, but as the show goes on it becomes more and more prevalent in the mix. Pretty good sound even if its not a dedicated board mix, and seems to be a low gen copy. Transferred June 2020 by LeifH.
The Kevin Davie Memorial Series
This series is in memory of Kevin Davie who died suddenly 31 March 2016. Kevin was an avid taper & recorded many concerts mainly in Vancouver, Victoria & Toronto. All these recordings have been sourced directly from Kevin’s master cassettes. With thanks to Mary Davie, Kevin’s Mother for allowing us access to all of Kevin’s masters. This is a joint venture between DGB, Dennis Orr, Seth Meister, Leif Henderson & John MacMillan.
Kevin was a dear friend of mine & helped me greatly when I first moved to Canada in June 1994 for which I will forever be grateful. He had a great sense of humour. He was always happy to remind me of Ray Cooper’s percussion solo that I had to endure at the end of all the Eric Clapton shows I went to in the 90s (there were many!). He did an excellent job in impersonating Mr. Cooper! Kevin had a great taste in music & shared my love of the blues. We hope that you enjoy these releases & that we can continue Kevin’s legacy for many years to come. You left this world way too soon. Rest in peace my friend.
DGB
Kevin and I had plans to post some of his shows himself. He needed the ratio boost! haha. We had begun to work on some of his shows, when we had a bit of a dust up over something silly. Sadly, we never had the chance to mend fences together. Hopefully, through this series of shows, Kevin's memory can be properly honoured and that he can continue to leave a lasting legacy with the recordings that he left behind. I also hope that when I go beyond this world that my master cassette collection that I haven't gotten to will find a similar new home with trader's and collectors and fans everywhere, too...
Pubblicato da EDGE a 13:21