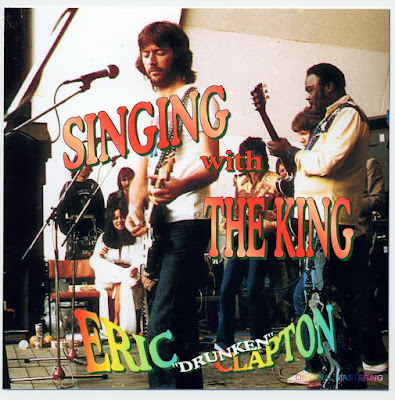 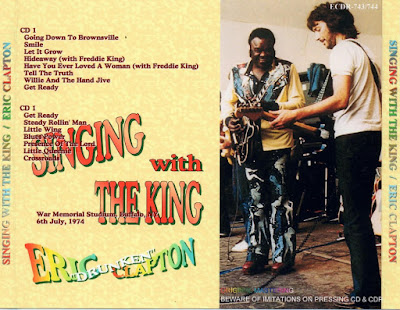 Geetarz Comments: Widely reported as the worst show of the 1974 tour, in fact this may be EC's lowest point on stage - ever. Eric is massively, incoherently drunk, and unintelligable at times. As the show begins with EC's 'outroduction' of emcee "Legs" Larry Smith, a member of the crowd shouts out "Clean Up Yer Act!!!!" which really says it all.

EC begins his set with a rambling "Last Train to Brownsville", and then engages in an angry tirade: "To be serious ... one more of them, I'll tell you, and YOU'RE OUT OF HERE! One more of them silly fucking fireworks and you are out of here! Behaviour!"

As if the audience wasn't aware of his state, after "Let it Grow", Clapton shouts "I am drunk and I am ready for fuckin' trouble!". Then, as guest Freddy King takes the stage, "he's strapping on his guitar, moving to the guest spot ... and if you haven't heard of him ... you don't fucking deserve him! His name is Freddy ..." at this point a member of the crowd shouts out "Wanker!", presumably directed at Eric - and probably deserved.

As the solo progresss in "Hideaway", EC simply lets his guitar feed back for bar after bar, while Freddy King solos. Then in "Have You Ever Loved a Woman", after the line 'it's a shame and a sin', EC opines "don't believe them! there's no shame, there's no sin...". Freddie King then proceeds to wipe EC off the stage with his solo. Unfortunately, it's the only high point of this show!

As "Get Ready" begins, the tape source for this CD begins to exhibit lots of wow and flutter, which comes and goes for the remainder of the recording. "Blues Power" ends with the beginning of "Presence of the Lord" which continues on Disc 2. As the band segues into "Little Queenie", EC mumbles "there it is again ... mumble mumble ... what the fuck is going on? ... well, I'm happy to get going - suits me, suits you" and then finally, in what has to be the second most bizarre and/or obscure "Little Queenie" reference from the 1974 tour (the "Martin Borman - Vote Nazi!" comment from the Pittsburgh show takes the #1 slot), EC says "Meanwhile, in Birmingham ... England, that is, not here, in Alabama .... they're making Persian carpets ... at 19,000 quid apiece ... there's only 10 Pakistanis here! They can't be bad - who am I?"

Members of The Band come out and join Eric on a disjointed performance of "Chest Fever" and then by all accounts, carry the drunken Clapton off the stage.

This show is interesting in much the same way as a gruesome car accident beside the highway - you don't really want to look, but there's a certain sick curiosity that makes you! Certainly only a recording for diehard fans.

Filler on Disc 2 is "Leon Russell With Eric Clapton / Apartment Jam 1974" as found in the bootography:

I Found Love/Down In The Bottom/Jam/Paint It Black (sic Painted Black)/Jam
Pubblicato da EDGE a 19:24