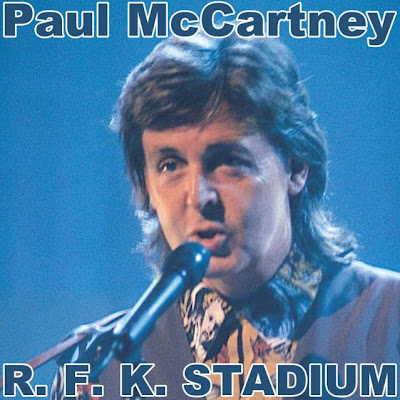 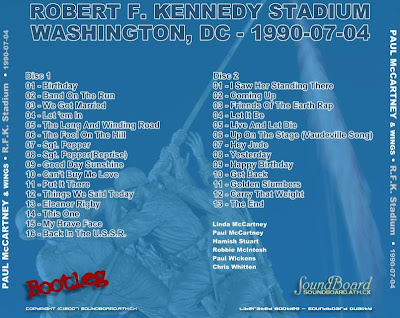 Unfortunately, a few songs are missing (but isn't 29 songs enough for a show????). The 3 opening songs (Figure Of Eight, Got To Get You Into My Life, and Rough Ride) were not on the master. Paul's "Lennon Tribute" (Strawberry Fields / Help! / Give Peace a Chance) are also missing (known as "The Medley" on most set lists). The odd thing is, though, when listening to the master, I hear NO break anywhere where those 3 songs should have been! They show up on the unofficial set lists as being between "Let It Be" and "Live And Let Die". I've listened to the master I don't know how many times, and there is no change in the applause, an edit I can visually see/hear, nothing! So, I wonder if they WERE played or not. 2 sites show The Medley as NOT played this date. I can only wonder.

This is a excellent show, with lots of energy from Paul, who's constantly whooping it up between songs. He's in great voice, and his bass playing, although a little "down" in the mix, is still a good thing to listen to! The mix was done wonderfully, and there were only a couple of "glitches" in the effects for a few brief seconds on a couple of songs (such as too much reverb when the "quick" part of Live And Let Die happens. Oh well, engineers are only human, too! Otherwise, the mix is damn near perfect, nice channel separation where it needs to me, and none of the background vocals are too loud/soft... just right.

The selection of songs range from the early 60's Beatles to his most recent album of the time (Flowers In The Dirt), and the arrangements are excellent. Some sampling from the original Beatles' recordings were used, such as the jet aircraft taking off in Back In The USSR to the cello parts in Eleanor Rigby.

He's surrounded by some top notch musicians on guitars and vocals. Linda's voice is not in the mix much, but her then honed skills on the keyboards made up for it. The guitarists effects ranged from some very natural sounding acoustical guitars to the wonderful distortion/feedback/sustain segue between Things We Said Today and Eleanor Rigby (was right on the money!).
Pubblicato da EDGE a 23:25