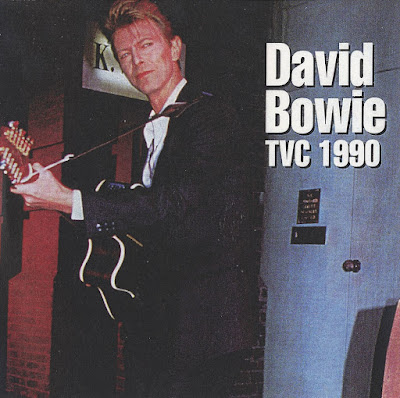 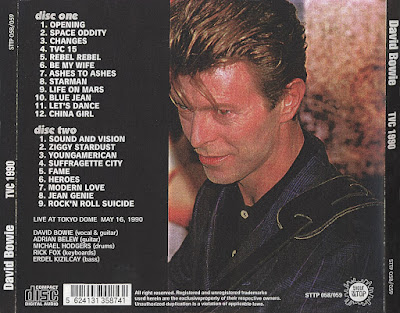 (Soundboard FLAC)
David Bowie
TVC 1990
Venue: Tokyo, Dome May.16.1990
Quality: 10, Soundboard
CD 1:
01 Ode To Joy
02 Space Oddity
03 Changes
04 TVC 15
05 Rebel Rebel
06 Be My Wife
07 Ashes To Ashes
08 Starman
- Fashion
09 Life On Mars?
10 Blue Jean
11 Let's Dance
- Stay
12 China Girl
CD 2:
01 Sound & Vision
02 Ziggy Stardust
- Station To Station
03 Young Americans
04 Suffragette City
05 Fame
06 "Heroes"
- Panic In Detroit
- Pretty Pink Rose
07 Modern Love
08 The Jean Genie - Gloria
09 Rock'n'Roll Suicide
Bonus:
01 Fashion *
02 Station To Station *
03 Stay #
04 Panic In Detroit #
05 Pretty Pink Rose #
Source info:
CDRs (from ebay) --> EAC --> FLAC
Bonus:
* original silver CD ("Live in Japan") --> EAC --> FLAC
# traded CDR ("Tour 1990 - Disc 4") --> EAC --> FLAC
Cover art is included.
Note on Beethoven's #9 Symphony: I think we - at DimeADozen - came to the conclusion, that the inclusion of this particular intro (taken from Clockwork Orange OST) is tolerated in the torrents.
Info taken from Bassman's Site:
This Japanese double CD contains almost the complete second show in Tokyo 1990, in excellent sound quality. The mising songs are FASHION / STAY / STATION TO STATION / PANIC IN DETROIT / PRETTY PINK ROSE. The original King Bisquit Flower Hour discs (the source of this CD) does not contain those songs either. A nice cover with only one mistake, the picture on the inside of the back cover is an Tin Machine picture from 1989! If you don't have the excellent and complete CD "Tour 1990", this can do as a good substitute.
Personal note:
I bought this in 2000 from ebay. CDs turned out to be CDRs, ... those were the days. Quality, sound and performance, of this is excellent. IMHO this is one of the best early 1990-shows on disc available. Early shows of the 1990 tour are marked by inclusion of rarely played songs. At the second half of the tour the setlist had less variations. So, here we get Starman, TVC 15, Panic In Detroit, Be My Wife, Rock'n'Roll Suicide, and the early(!) version of Young Americans in excellent quality.
This early tour version of YA is about 6+ min, compared to little above 4 min in the later half of the tour. The difference is a great semi-improvised long outro of repeated singing 'break down and cry' after an abrupt stop before 'Ain't there one damn song'. In the later version after this stop the stage remained silent and dark for half a minute and the band went right into Suffragette City. At the beginning of this particular version DB quotes the Beatles' A Hard Day's Night. This is simply a great version of YA.
Due to Bassman this release is sourced from King Bisquit Flower Hour discs, which lack 4 songs. In order to have the complete show I added them as bonus from the best other sources I have: Fashion and Station To Station are taken from "Live in Japan", of which I have the silver CD. This release is from a different source (video IIRC, yes there is an excellent video of this show available). The other three missing songs come from a traded version of the release "Tour 1990" (traded with the owner of the Helden-site), a 4-disc set of (very) good audience recordings.
After Modern Love DB makes a confusing note about encores. The story behind this is rather funny and was solved in the DB magazine "Crankin' Out" #4. The scan of that article can be found in the cover art folder.
And finally, the picture on the back cover is not a 1989 Tin Machine photo as Bassman says. It is from a photo session promoting the Sound+Vision tour.
Pubblicato da EDGE a 05:46