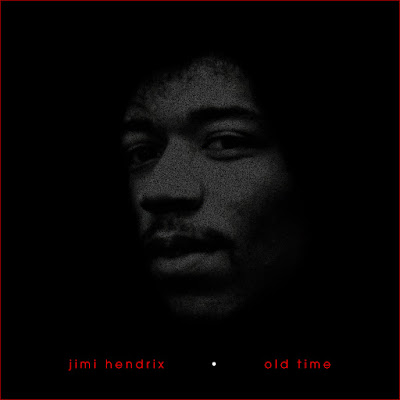 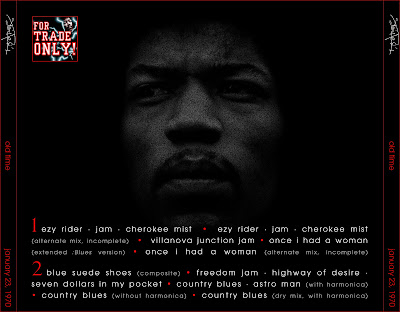 (Studio FLAC)
Jimi Hendrix
Record Plant Studio
New York
1970-01-23
Excellent Audio Quality Studio Outtakes (atm 214-215)
Lineage:
Master > Analog Copy > CDR (x) > Extracted to wav and digitally restored in unknown application > wav > CDR > Toast Titanum 8.0.1 to extract wav and convert to flac > flac
Disc 1 77:47
Ezy Rider (12) >> Jam >> Cherokee Mist (7) 20:14
Ezy Rider (12) >> Jam >> Cherokee Mist (7) [alternate mix] 16:02
Villanova Junction ( ) Jam 19:34
Once I Had a Woman (1) 8:15
Once I Had a Woman (2) 5:23
Disc 2 64:55
Blue Suede Shoes (1)/(2) [composite] >> 13:42
Freedom (10) Jam >> Highway of Desire >> $7 in My Pocket 23:06
Country Blues (1) >> Astro Man (5) 10:35
Country Blues (2) 8:29
Country Blues (6) 8:25
this is as much of this session as we have at this point, and sounds about as good as it's going to. as usual, pitch and phase correction were done and removal of a some digital clicks.
session order is not known with certainty, but some guesses can be made. the Ezy Rider/MLK jam/Cherokee Mist jam was placed first since "Sessions" says that Don joined on harmonica partway through the session, and this is the only track we have from the session without harmonica. an alternate mix (with the first 4 min missing) is also included; this is the mix that has jimi talking about a broken string at the end (these vocals were mixed out of the longer version). instruments are also placed differently in this mix.
the Villanova Junction jam is the shorter version. when the longer 27+ minute version starts freely circulating, there's room for that to be substituted in place of the shorter one.
Disc 1 Track 4, "Once I Had a Woman", is the :Blues mix, but runs to the end where the song breaks down (the :Blues version fades before this point). this version is the most complete one we have, but does have about 1 minute edited out of the middle. the old tape version (with start and end cut, running 5:23) starts with this missing minute, so it was also included
as Disc 1 Track 5. it's a different mix so was worth including for that reason too. the horrible overdub-nightmare version from the 1975 release "Midnight Lightning" has 10 seconds or so extra right at the start that the other versions don't, but the overdubs render this virtually unusable.
Blue Suede Shoes has the start from Loose Ends joined on. it actually runs right into the long Freedom Jam/Highway of Desire/$7 in My Pocket track, and the two have been joined together here.
the start of Country Blues seems to follow from the end of $7, although there is some missing so they can't be connected. 3 different mixes of CB are included. the longest has the 2-minute Astro Man instrumental at the end, and is a mix with harmonica. the version with the harmonica mixed out is also included, as is the "dry" mix without the echo effects. there are also shorter edits of the with- and without-harmonica mixes, but they weren't included, nothing really new with them.
official tracks were available as reference for pitch-synching for all tracks except for the VJ jam and the Highway of Desire jam. however, since Blue Suede Shoes connects to the Highway of Desire jam, and Country Blues also probably ran on from that, it was possible to match the pitch of Highway to both of those tracks. that left VJ as the only track without an official pitch-synch reference.
Pubblicato da EDGE a 06:40