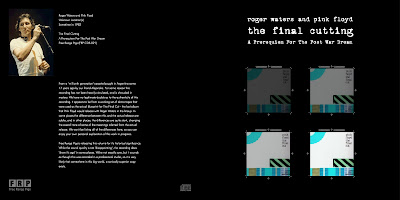 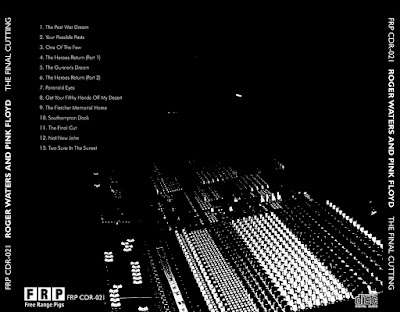 (Studio FLAC)
Roger Waters and Pink Floyd
Unknown Location(s)
The Final Cuttings - The Final Cut Working Demos
Sometime in 1982
The Final Cutting
A Prerequiem For The Post War Dream
Free Range Pigs (FRP CDR-021)
Speed Corrected/Remastered using Cool Edit Pro 2.1 by Spectre [2006-06-27]
01. The Post War Dream 2:10
02. Your Possible Pasts 4:42
03. One Of The Few 1:16
04. The Heroes Return (Part 1) 2:38
05. The Gunner's Dream 5:03
06. The Heroes Return (Part 2) 1:25
07. Paranoid Eyes 3:30
08. Get Your Filthy Hands Off My Desert 1:11
09. The Fletcher Memorial Home 4:12
10. Southampton Dock 1:40
11. The Final Cut 5:02
12. Not Now John 4:28
13. Two Suns In The Sunset 4:41
41:58
Notes:
From a "millionth generation" cassette bought in Argentina some 17 years ago by our friend Alejandro. For some reason this recording has not been heavily circulated, and is shrouded in mystery. We have no legitimate doubts as to the authenticity of this recording. It appears to be from a working set of demo tapes that were used as the actual blueprint for The Final Cut -the last album that Pink Floyd would release with Roger Waters in the lineup. In some places the difference between this and the actual release are subtle, and in other places, the differences are quite stark, changing the overall tone of some of the meanings inferred from the actual release. We won't be listing all of the differences here, so you can enjoy your own personal exploration of this work in progress.
Free Range Pigs is releasing this volume for it's historical significance. While the sound quality is not "disappointing", the recording does "show it's age" in some places. We're not exactly sure, but it sounds as though this was recorded in a professional studio, so it is very likely that somewhere in this big world, a sonically superior copy exists.
Credits: Jim Canale and Free Range Pigs would like to thank the following people for their contributions to this effort:
Alejandro Gibaut for graciously providing the Source Recording.
The Pentagon Pig for providing Quality Assurance Services.
Aleksi Manninen for providing the Cover Art.
SPECTRES COMMENTS:
A very nice release by FRP, but rather fast and in need of some tweaking. As the original notes claim, this is from a "millionth generation" cassette, so the quality is a bit lacking. Most of the songs sounded muddy, very hissy, the high end weak, and a few of the songs were overdriven and bassy. I pumped up the highs on all of the tracks, boosted the levels on some and lowered them on others, reduced the hiss, speed corrected the tracks, flac'd at level 8 (removing all the sector boundary errors), and genned new fingerprints. The end result is the best I could do with what I started with. One thing I noticed is the high end boost brought out some nuances missed in the original tracks. You can hear Roger and some of the background effects better now.
Pubblicato da EDGE a 08:41