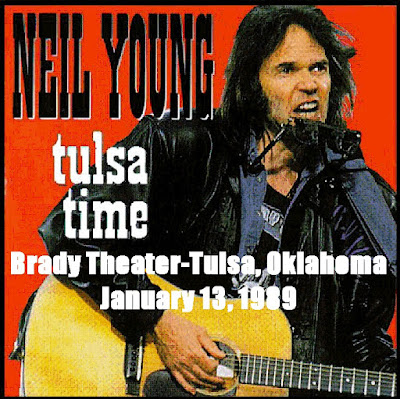 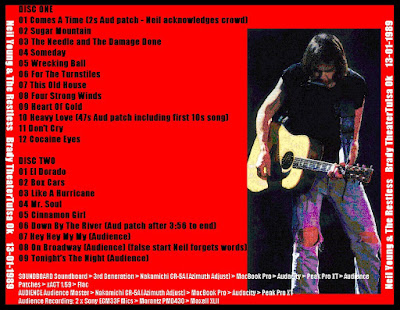 (Soundboard/Audience FLAC)
Neil Young & The Restless
Brady Theater-Tulsa, Oklahoma
January 13, 1989
Soundboard w/Audience Patches (Dec 2009 transfer re-master)
Lineage:
Soundboard > 3rd Generation > Nakamichi CR-5A (Azimuth Adjust) > MacBook Pro > Audacity > Peak Pro XT
Audience Master > Nakamichi CR-5A (Azimuth Adjust) > MacBook Pro > Audacity > Peak Pro XT
Recording: 2 x Sony ECM33F Mics > Marantz PMD430 > Maxell XLII
CD1
01 Comes A Time (2s Aud patch - Neil acknowledges crowd)
02 Sugar Mountain
03 The Needle and The Damage Done
04 Someday
05 Wrecking Ball
06 For The Turnstiles
07 This Old House
08 Four Strong Winds
09 Heart Of Gold
10 Heavy Love (47s Aud patch which includes first 10s of the song)
11 Don't Cry
12 Cocaine Eyes
CD2
01 El Dorado
02 Box Cars
03 Like A Hurricane
04 Mr. Soul
05 Cinnamon Girl
06 Down By The River (Aud patch after first 3:56 to end and rest of show)
07 Hey Hey My My (Audience)
08 On Broadway (Audience) (false start as Neil forgets the words)
09 Tonight's The Night (Audience)
Total 127:47
Some 10+ years ago I did a transfer of this show using average equipment and before I knew too much about digitzing tapes. That version I traded to Pink Robert and it eventually found it's way here at least in 2006 and maybe earlier. A few things I realized about that first transfer, I had no clue what I was doing on eq'ing, smoothing the levels, taking out pops/clicks and likely used noise reduction in the process and had no clue about azimuth adjustment. In addition, why I didn't patch the missing part of Heavy Love I'll never know.
I've been planning to revisit this show for some time and once I confirmed I was smart enough to not toss the tape after the first transfer (and re-found it), I finally found time to take on a new transfer.
Anyone that has the previous version knows there are a number of problems with the Soundboard source of this show in volume fluctuation and few pops & clicks.
Here are the fixes I've made:
Smoothed and leveled ending of Sugar Mountain
Smoothed and leveled start of Needle & The Damage Done
Boosted drop in volume in the middle section of Needle & The Damage Done
Removed a number of pops & clicks in the source tape
Regarding the SB tape (3rd Generation) any Eq'ing was very slight, it always bothered me that Neil's guitar seems to be buried in the mix and the vocals pushed forward so I pulled the guitar frequencies forward just a touch to help balance it a bit better, this improved the acoustic section more than the electric section.
As for my Audience master, though it's not as good as the Dallas show I taped the next night, all in all, I was not disappointed with it considering the location I was taping from.
So here you have a fresh transfer that makes, for the first time, the SB/AUD mix complete with no missing sections.
Pubblicato da EDGE a 19:53