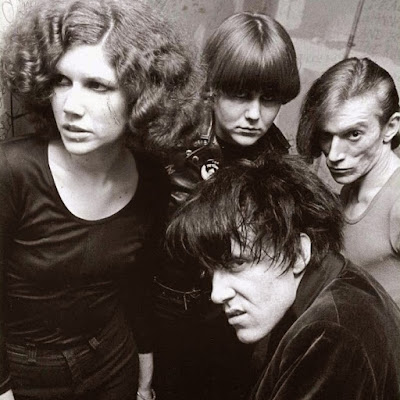 Tracks 01 - 03 are live audience recordings, and as such of lower quality (but still considerably better than the CBGB's mp3 version that's here:-
http://www.garagepunk.com/2006/10/04/out-of-the-vaults-into-your-ears-15/
which sounds as if the tape it was sourced from has been put through a mangle or something!).
The rest of the tracks were originally taken from the mixing desk/soundboard, and are mostly of at least very good quality.

Note that, although some of these could probably benefit from it, I have used no equalization, noise reduction or "click and pop" filtering whatsoever on the tapes of the bootleg vinyl recordings, they have been left exactly as they were recorded originally, as far as my playback equipment and soundcard was able to reproduce and capture them. If anyone has the time and wants to try doing so (i.e. NR), please feel free to upload an alternative cleaned up copy if possible, unfortunately I don't have the time to do it at the moment (and I do know from prior experience that click-and-pop removal in e.g. CoolEdit Pro can take ages to do properly, i.e. without overly affecting the original musical quality or making it sound too "digitally" compressed).
Pubblicato da EDGE a 06:23