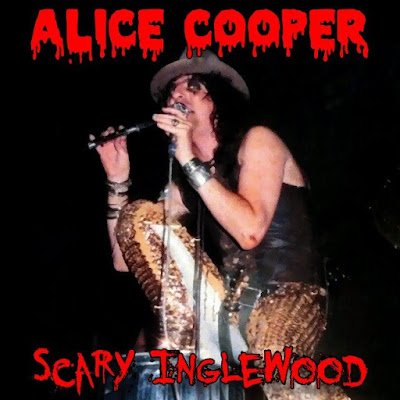 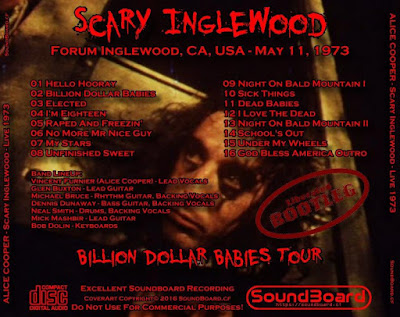 Here's Alice Cooper (when the name applied to a band rather than a singer) on their 1973 North American tour in support of the "Billion Dollar Babies" album which broke box office records and featured 64 concerts in 59 cities in 90 days. The tour allegedly grossed $20 million but once the ruinous expenses were deducted, the profit came to something like $4 million. This was due to the costs of employing about 40 people (including illusionist James Randi, who appeared in the stage show as "The Executioner") as well as transporting 12 tonnes of equipment from city to city including a gibbet, a guillotine, a surgical table, hundreds of baby dolls, dozens of mannequins and the stage set itself. Bob Dolin was drafted in to play live keyboards and Mick Mashbir was allegedly brought in to cover for Glen Buxton's occasionally erratic performances due to his health issues at the time.

This is a pretty good soundboard recording which I got years ago in a snail mail trade. None of this performance was used on the "Billion Dollar Babies" 2 CD deluxe edition as the live recordings featured there were taken from the April 28th and April 29th performances in Houston and Dallas respectively.

Please note that there is a little evidence of tape mash in places, particularly during the second half of "I Love The Dead" (nothing too serious though). Also, please note that some of the banter / audience participation towards the end of the show (particularly during "School's Out") may upset you if you're easily offended. Probably not one to play in front of the kids...
Pubblicato da EDGE a 20:00