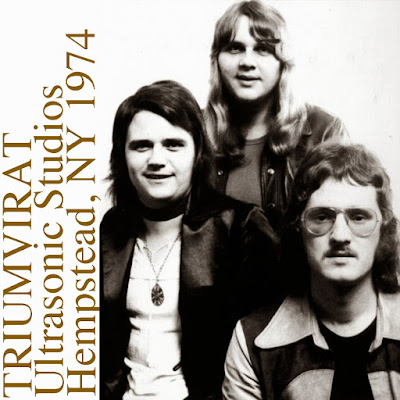 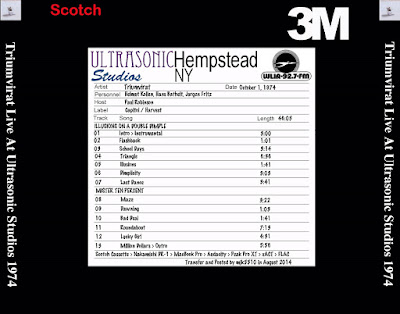 (FM broadcast FLAC)
Triumvirat
Ultrasonic Studios
Hempstead, New York
October 1, 1974
Transfer: Scotch 60 Minute Highlander Cassette > Nakamichi DR-1 (azimuth adjusted) > MacBook Pro > Audacity >
Peak Pro XT (volume smoothing / channel fix / edit / subtle tweak / index) > xACT 2.21 > FLAC
Illusions On A Double Dimple
01 Intro > Instrumental
02 Flashback
03 School Days
04 Illusions
05 Triangle
06 Dimplicity
07 Last Dance
Mister Ten Percent
08 Maze
09 Dawning
10 Bad Deal
11 Roundabout
12 Lucky Girl
13 Millions Dollars > Outro
To the best of my knowledge this is the first appearance of this set here, in fact, I could find no info at all on Triumvirat's performance as part of WLIR's Tuesday night concert series.
I discovered this in a batch of tapes a friend shipped me that came from a former LA radio DJ.
The tape was simply labeled 'Triumvirat Live/Ultra' on the outside which didn't give me much in the way of identifying the show or date.
There were some clues in the contents, recorded live in front of a studio audience made me think Ultrasonic Studios but an internet search turned up not a mention of Triumvirat as part of the concert series. The intro gave me no specific clues except a familiar voice introducing the band but the outro was the motherlode. During the outro it is mentioned the band would be playing the Academy of Music on saturday night, we have a bootleg of this performance from the date of October 5th. It's also mentioned Fleetwood Mac, Triumvirat's touring partner, would be appearing in studio for next Tuesday night's show which they did on October 8th.
The tape had some issues, the right channel of Side A of the tape was full of problems, major volume fluctuations, low volume that when increased created a massive amount of hiss to serious drop outs. After working on fixes I decided the best fix, and most pleasing to the ear was to copy the left channel to the right channel. Side B was in much better shape with some simple volume fluctuations that were easily repaired and smoothed, no channel patch needed.
The musical contents are nothing short of brilliant, 'Illusions On A Double Dimple' played in it's entirety in FM quality with all the wonderful improv and musicianship that comes with a Triumvirat performance, which unfortunately, there are precious few available. If I'm not mistaken the few 1974 performances available are audience recordings and I believe this will be a very welcome addition.
Pubblicato da EDGE a 18:34