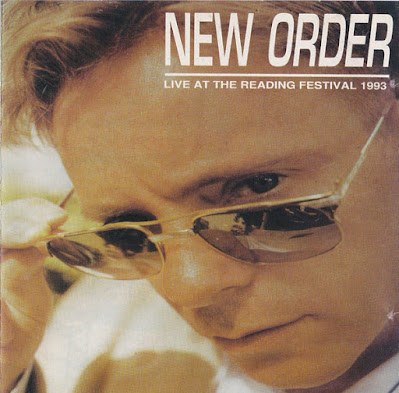 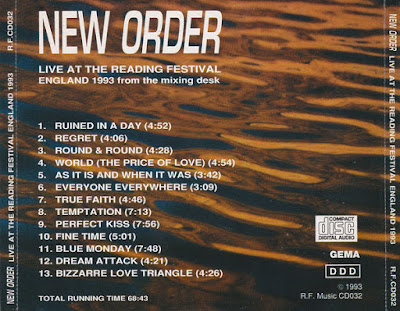 (FM broadcast FLAC)
NEW ORDER
READING FESTIVAL
ENGLAND
Sunday 29th August 1993
Source: BBC CD
Lineage:
BBC Archives CD > iTunes (.WAV format) > SHN (Carbon Shorten) > TLH > WAV >Flac, level 8, align on sector boundaries
01. Ruined In A Day
02. Regret (Deleted,Officially Released On Retro)
03. Dream Attack
04. Round And Round
05. World
06. As It Is When It Was (Deleted,Officialy Released On Retro)
07. Everyone Everywhere
08. True Faith
09. Bizarre Love Triangle
10. Temptation
11. The Perfect Kiss
12. Fine Time
13. Blue Monday
notes
At the time, this gig was regarded by many as New Order's swansong; the fact that a good proportion of the audience thought this might be the group's last-ever gig added a special frisson and atmosphere for those of us who were there. Basically it's the same set as the rest of the (fraught)'93 tour but with, I think, a bit of extra fire. The show was broadcast in part by the BBC and other networks round the world. However, this BBC CD, taken straight from a broadcast quality CD (complete with reference to a certain pop star currently undergoing a court case for offences relating to children faded out!) is the complete show with all the songs in the right order. "BLT" and "Dream Attack" are particularly rare, not appearing on the well-known "Electronic Ecstasy" boot,, and will probably not have been heard in this quality before. This is, as far as I know, the first time the complete show* has been distributed, and it's a cracker. Sound quality is superb. I've done absolutely nothing to the files at all, figuring that if it's good enough for Auntie, it don't need no fiddlin' about with.
All in all, one of my favourite-ever NO gigs. (*the only bit that are missing are a few short bits of between-song "banter")
Pubblicato da EDGE a 20:07