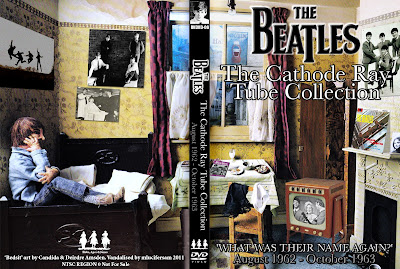 This 8 part set is intended to compliment Unsurpassed Promos, gathering together the remaining unreleased TV appearances.

I've reconstructed each show from the most up to date sources and offered a remastered audio option for all mimed appearances. Several people have contributed new source material for which I am indebted. As a result, virtually the entire set is highly watchable, with very little timecoded or poor quality footage. Each disc is thoroughly indexed and menued, allowing one to easily search through the programmes.

I also decided to add the audio for the 'lost' TV appearances of the Palladium, Big Night Out and It's The Beatles. The two Palladium shows are enhanced by some fantastic colour stills contributed by the community. And someone has also donated a partial upgrade of the first show. It's The Beatles uses the restored and reconstructed audio from our disc 'The Empire Strikes Back', along with the video reconstruction of the last four songs I made previously. Big Night Out is sadly saddled with but one colour still... but it's nonetheless a fantastic performance that deserved to be included.

Some of the shows I've done extensive work on including Paris, The Beatles In Nederland, Melbourne, Around The Beatles, Big Night Out, Ready Steady Go, Shea Stadium and the Budokan. Some of this material has appeared on other titles I've done, sometimes in PAL. But here it is all in NTSC.

NOTE: Although I've included some studio based talk appearances, I've steered clear of the sort of news chat items which would otherwise have clogged up these discs. Because this is a collection of TV appearances, I also haven't included any performance footage captured by news cameras or shown in cinemas - this includes footage from Manchester, Sydney, Washington, the Hollywood Bowl and the featurette Music! The four Ed Sullivan shows are also not to be found here as they have been released in their complete form on commercial dvd (with the Washington concert likely to follow in due course). That said, there is still much here to enjoy...

Note that this is a non-profit fan project intended for free distribution among the Fabs' most dedicated followers. Please don't SELL copies of these discs, and support any future official releases of this material (unlikely as that may be...)
Pubblicato da EDGE a 16:40