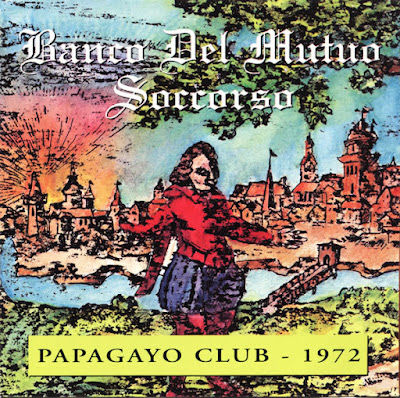 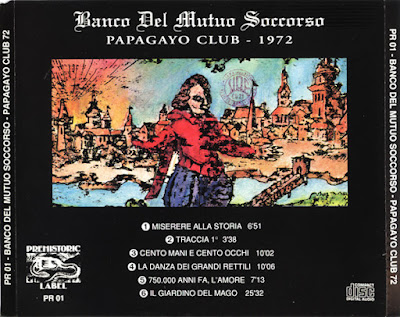 (Audience FLAC)
Live Bootleg, released in 1994
lineage
Silver CD>Eac (secure mode)>flac
Francesco Di Giacomo / vocals
Marcello Todaro / guitars
Gianni Nocenzi / keyboards
Vittorio Nocenzi / keyboards
Renato D'Angelo / bass
Pierluigi Calderoni / drums
01. Miserere Alla Storia (6:51)
02. Traccia 1º (3:39)
03. Cento Mani E Cento Occhi (10:03)
04. La Danza Dei Grandi Rettili (10:06)
05. 750.000 Anni Fa, L'Amore (7:12)
06. Il Giardino Del Mago (25:28)
Total Time: 62:39
Recorded live in 1972
Releases information
CD Prehistoric (PR 01) (1994)
BANCO DEL MUTUO SOCCORSO Papagayo Club 1972 reviews
http://www.progarchives.com/album.asp?id=12735
Where I live, if you see anything by a band like this, you get it. It is extremely rare (almost nonexistent). I saw this disc in my favorite used shop, but wasn't sure. It looked a little sketchy, and I hadn't heard anything about it. I went home, and checked it out. After some searching, it turned out to be a legitimate release. I wasn't too worried about it not still being there. The chances of many other people knowing what it was were pretty slim. So, I bought it (at an import price as well).
As the recording was made during the "Darwin" promotional tour, the songs come from the first two albums. The club was obviously small, and the recording is very poor. It sounds like a bootleg. The first track is especially bad, but it does get better. If you can get past this, and the audience chatter, the performances are quite good. They put on a heck of a show for that small crowd.
The value in this mostly comes from a historical perspective. As a snapshot of these guys in their initial glory, it works quite well. If you are looking for a great Banco live recording, you should probably go elsewhere. Every song can be heard on another live CD, or DVD, with the exception of "Miserere Alla Storia." Unfortunately, this is the one with the worst sound.
I am not disappointed in my purchase, because I value it for what it is. The lonely little disc also needed to find a home, with someone who could appreciate it. If you are in a eclectic prog vacuum (like me), and run across this, get it. If you have other options, best save this one for the final completion of your Banco collection. The rarity aspect, and the quality of the performance, give it a solid two stars.
Pubblicato da EDGE a 21:15