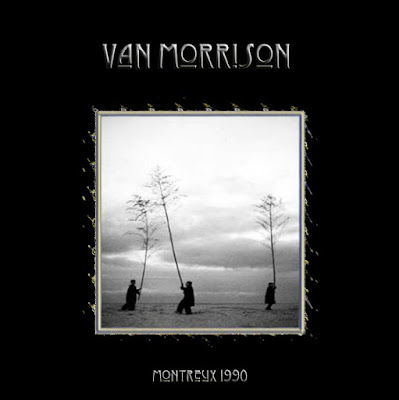 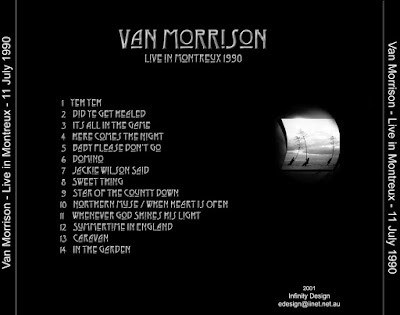 lineage: these files are from my flac vine dvd copy of a VM top 12 shows as ranked at vantrades back in '07 and was circulating before the web sheriff showed up to clean up dodge.
comment: this was ranked #2 after #1 Dublin up to Sandy Row. i'm kinda surprised this hasn't shown up here yet, but as i need to improve my ratio, i'm happy to make the supreme sacrifice and share it with you all. actually, everybody probably already has it. anyway, enjoy if this is new to you. and merry christmas to all!

Also booted on Down by Avalon. Live in Montreux has Georgie Fame singing "Yeh Yeh" while Down by Avalon doesn't. The sound quality is very good soundboard/FM.
The show opens with Georgie Fame doing an excellent "Yeh Yeh". Van comes on and does "Did Ye Get Healed" and then "Its All in the Game". Both pretty similar to the Night in San Francisco CD but a bit longer and not so rushed. Van throws in a very short part of "I'm Ready" into "Its All in the Game". This was one of the tracks omitted from The Philosophers Stone.

Next Van launches into a lively "Here Comes the Night" followed by "Baby Please Don't Go". The band is hot and Georgie's back up singing is great. It sounds like everyone was on this night. "Domino" is great and runs nicely into "Midnight Hour". This is one of the best "Domino"s I've heard. Although not as frantic as the Pacific High version, the inclusion of "Midnight Hour" adds something special. A joyous "Jackie Wilson Said" is next and it sounds like Van and the band are having a great time.

What follows must have stunned the audience. With Steve Gregory on flute Van sings a glorious "Sweet Thing". A lot slower than previous live versions this song floats along and then seams nicely into "Astral Weeks" before returning back to "Sweet Thing". The song finishes with a little mantra that I think comes from the Common One album.
Like me many van fans probably thought van had to be in some sort of mystical muse to sing and perform like this, but as easily as he swung from "Jackie Wilson Said" to "Sweet Thing", he swings back to perform a laughing bouncy "Star of the County Down". Its almost like "Sweet Thing" didn't happen, or maybe the man can just turn it on at will.
After "Star of the County Down" a slower "Northern Muse" starts. This then changes to "Auld Lang Syne", "No Prima Donna" and finishes with "When Heart is Open". Great stuff. "Whenever God Shine His Light" is certainly not one of my Van favorites but this version really goes. It bounces along, has bits of "Take Me Back" and finishes with "Spirit", which is probably appropriate. And I could swear that van changes ""when you've given up hope..." to "when you've given up POPE."

"Summertime in England" is awesome. At 13 minutes its one of the longer versions around. It is very similar to the Pagan Streams version but is seamless and doesn't have the chatter. Van adds "A Town Called Paradise", "Take Me Back" and "Boogie Woogie Country Girl" to the formula. "Caravan" is the first encore. It's a fine version with Van lecturing on the benefits of Bovril and Horlicks. The show ends with a lovely "In The Garden". No fancy stuff here, just a fine version to end a great show.
Pubblicato da EDGE a 19:46