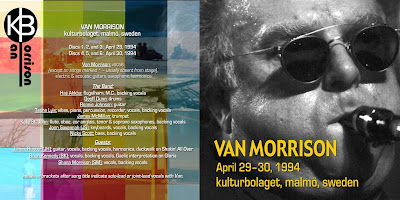 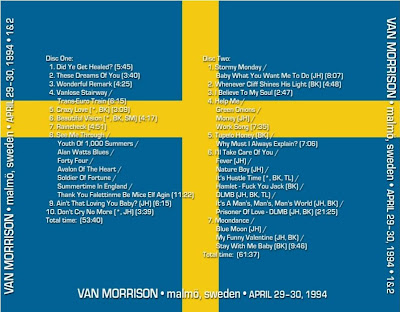 NOTES:
Review of the concert by a Swedish VanTrades member:
There were 2 shows on the 29th and 30th of April, 1994 at Kulturbolaget in Malmo. Sometimes Kulturbolaget is refered to as KB. It has nothing what so ever to do with KB Hallen in Copenhagen. Kulturbolaget has a 750 capacity and is a rockclub. No chairs etc. The first show sold out immediately (first time in the club's history I believe) and the other show was also a full house, although it was still possible to buy tickets the day of the show.

The first show clocked in at 170 min and the second at an unbelievable 186 min which must be one of if not the longest ONE set shows Van has ever done. He had to be pulled of the stage by the manager because he was missing the last ferry to Copenhagen where he was staying. Apparently none of the hotels in Malmo (including the Sheraton and Radissons etc) were up to his standards. These long sets can in part explain why there was booing when Van left the same stage after only about 75 or so minutes when he played KB again in May this year.

Now why do I know all this? Well I'm pretty sure that it is my recording that is being talked about. I DAT taped both shows with great results. I'm aware of one other recording of at least one night but it was not as good as mine (and analog). There is one flaw in that I had some problems switching tapes so "Shaking All Over" from the 30th has been substituted from my friend's analog recording.
Pubblicato da EDGE a 21:30