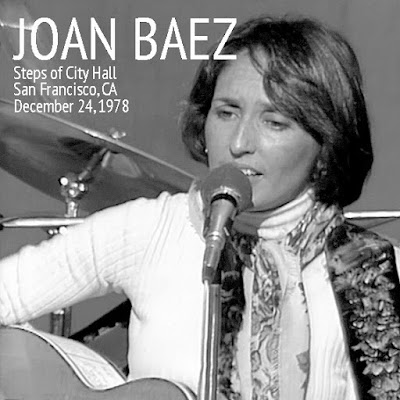 - original notes:
Joan performs a free concert on the steps of San Francisco's City Hall as her Christmas gift to the city. Joan is participating in the candlelight memorial march, following the November 27, 1978 assassinations of San Francisco Mayor George Moscone and Supervisor Harvey Milk (killed by the former Supervisor Dan White). White was paroled in 1984 and committed suicide less than two years later.

This recording seems like a really important piece of music history. I believe this was professionally filmed as well,  because at the beginning of "Amazing Grace", Joan says "The television part of this has to end exactly on the dot". I was not able to find any film available or any reference on the net.

The tape played really slow, so I spent a few days working on this doing pitch tests.  I believe I've adjusted it to near perfection. This sounds SO GOOD now !!! I'm sure many Baez fans haven't heard this one. You'll enjoy it.

During this concert, Joan performs her first recorded song "Scarlet Ribbons" ~ recorded in 1958. After Joan performs "Blowin" in the Wind",  she is joined by a choir and they sing through a collection of Christmas songs. Unfortunately "Holy Night" fades out early, missing the very end of the show. Joan also thanks Bill Graham for the sound.
Pubblicato da EDGE a 10:05