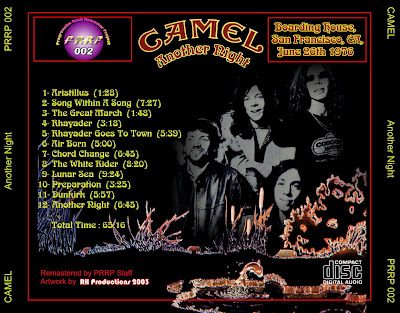 notes:
Coming off the successes of Mirage and Snow Goose, 1976 saw Camel release another masterful work called Moonmadness. Each member of the band contributed compositions to the album which reached #15 in the music charts. Camel had an extensive tour of the United Kingdom in March and April of 1976 to coincide with the release of this new album. The addition of Mel Collins on Sax and Flute had changed the Camel sound. His inclusion in the band at the beginning of this tour had given Camel more of a jazz feel. This was also the first time that Camel had used film as a visual component of their shows. As Andy Latimer told Melody Maker, "This is the first time we've used films, and I don't want us to get into it too much. ...We're not a very bopping band, so it's nice for the audience to have something to watch". A short break followed the 17 concert, U.K. tour after which Camel came to California for a performance in San Francisco at the Boardinghouse on June 26th. This was their first US performance in over a year and their last until February of 1979 when they again returned to play in California.  Six of the seven new Moonmadness album songs were played that night. The concert begins with two of the new entries. The audience is then told that they are about to get, "a little slice of the Snow Goose". The first three songs of that all instrumental album are then played with received with great enthusiasm. The band returns to Moonmadness material playing Air Born and Chord Change. They then proceed to The White Rider from Mirage, Lunar Sea from the new album, two more from Snow Goose and then a final selection from Moonmadness.
Pubblicato da EDGE a 01:30