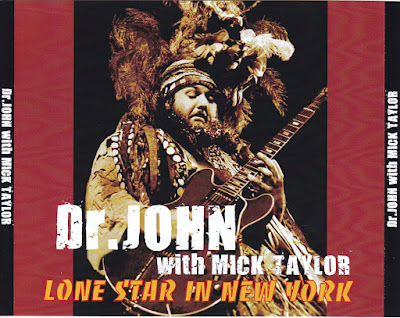 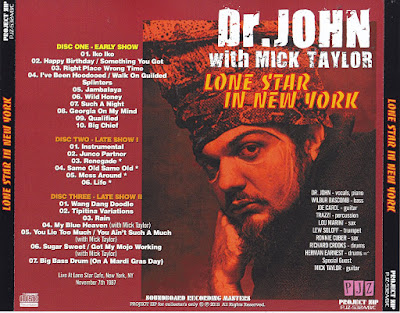 
Here's how this went. dr. John was going back and forth between New Orleans and NYC and had a place not far from the Lone Star Cafe so he played there on a regular basis. we had many chances to hang out with him at the shows and he always had great stories. He gave me the ok to plug into the board this night. At the time of this show, dr. John's bass player was the great wilbur bascomb. Wilbur was also working with Mick Taylor's band. between shows i was in the dressing room with my good friend bobby when Mick came in to see Wilbur. I noticed this and mentioned it to my friend and suggested that maybe Mick could sit in with dr. John. we first went to dr. John and told him that mick would like to sit in for a few. we then said to mick that dr. john would like him to sit in. apparently our little plan worked as they both agreed. mick came up for three songs. probably not being too familiar with the new orleans style, during the first song he seemed a little unsure of himself. after the first song i was at the sb calling for a blues since i knew mick would do better in that setting. the second song was a medium tempo blues shuffle and it was good for everyone. the final song was pretty straight ahead and worked well too.
Pubblicato da EDGE a 15:29