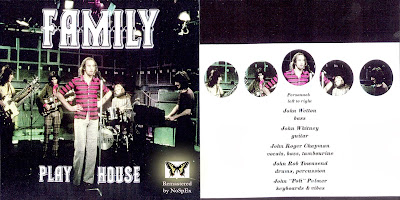 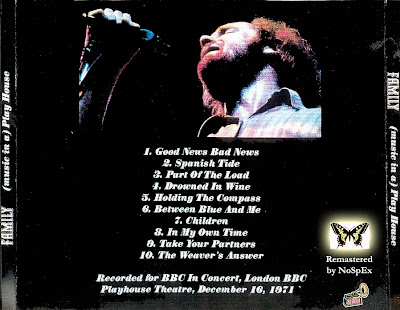 3 "Part Of The Load"
Long intro, really grooving. Shimmering vibes. Silly, primitive synth solo. Not as chaotic as other versions. End jam sounds like Allman Brothers, except for the scat-growling of Chapman.

4 "Drowned In Wine"
Good version - a little tame, except for Chapman of course. Wetton's bass is really punchy. Palmer was certainly no virtuoso on flute, though. He should've thrown in some effects.

5 "Holding The Compass"
Some great country-fied (country-fried?) riffs from Wetton on second guitar. Palmer contributing some vital cowbell, which at one point Peel remarks that he plays it "with unusual sensitivity".

6 "Between Blue and Me"
Chapman is introduced as playing bass on this tune, and not badly I might add. Retains the "majestic" quality of the studio version: low D-tuning, steady pace of dual guitars, with some added piano by Palmer

8 "In My Own Time"
The booming bass reminds me of the Windsong release which featured this tune from an earlier recording. Probably the same.

9 "Take Your Partners"
It was a shocker to hear this played live. I thought it had too much studio feeling to be recreated, but they knew how to do it.

10 "Weaver's Answer"
Closing number in which the band, as always cuts loose. Sorching vocals, blaring synth solos, meaty vibes... it's all there. A little electrical hiss towards the end, but it's the only defect I could hear with the whole recording, and is quickly resolved anyway.
Pubblicato da EDGE a 08:39