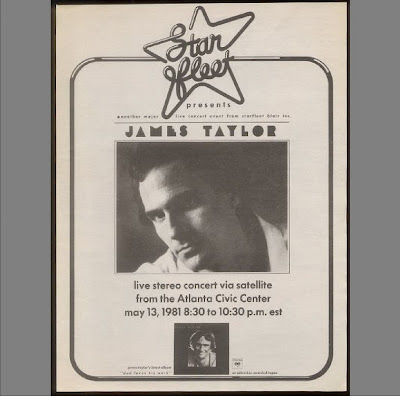 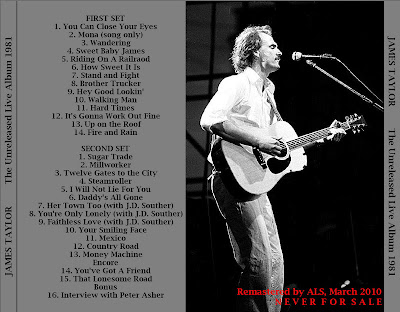 In 1981 James Taylor planned to release a live album. His performance at Radio City Music Hall was recorded, but it didn't turn out so well. While the music sounded great, JT's banter and comedic timing were off, a rarity for him. Something must have been amiss because a week earlier he was broadcast nationally via satellite and, as I learned from a member of Dime, instructed his crew not to tell him the exact night of the broadcast (he only knew it was one of three nights). The results of the Atlanta broadcast were stellar - one of his best shows ever. JT did not release a live album in 1981, but, if he did, it might have sounded like this one.

Editing notes:
Selections from the 5/13/81 show were made based on what sounded best to me. I have 8 versions of the show, threw on the headphones and made the call. Most of the between song banter comes from Source C as the "Dad Lives His Work" bootleg was heavily edited. This upload could also be called "the definitive version of 5/13/81" (for now). Speaking of editing, I edited out most of the between song banter in Source A due to reasons noted above.

Other notes:
The Atlanta show is usually dated 5/19/81 and I take responsibility for passing along bad information. In September 2003 I shared a version of this show (Source C) on the Archival Group that was longer than "Dad Lives His Work" but still not complete. This version was dated 5/19/81 and I kept the date to avoid confusion with a show listed as Atlantic City 5/13/81.

Final note:
JT's band for this tour was about as close to a full rock band as he's ever assembled. It included: Billy Payne - Keyboards,
Waddy Wachtel - Guitar, Dan Dugmore - Guitar, Peter Asher - Percussion, Rick Marotta - Drums, and Leland Sklar - Bass as well as
David Lasley - Background Vocals and Arnold McCuller - Background Vocals. After this tour the volume at JT's concerts was turned down.
Pubblicato da EDGE a 21:48