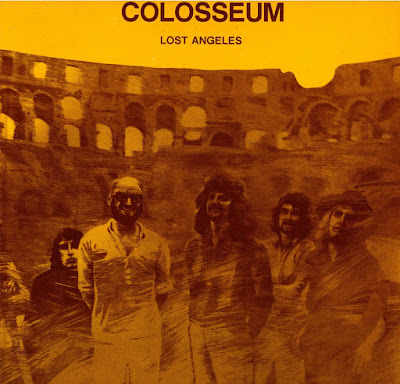 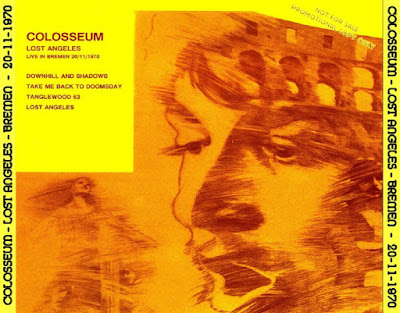 (Soundboard FLAC)
Colosseum
Live in Bremen
20 November 1970
Source:
Soundboard -) AM Radio ? -) ? -) Bootleg Vinyl copy -) Technics 1210mk2 with 881mk2s stylus -) Tascam DA20mk2 (A-D conversion 16 bit, 48kHz) -) PC -) Steinberg Clean 5.0 -) Cubase SX 2.0 Mastering -) Wave -) SHN -) Torrent
Jon Hiseman: Drums
Dick Heckstall-Smith: Saxes
Dave Greenslade: Organ, Vibes
Dave 'Clem' Clempson: Guitar, Vocals
Chris Farlowe: Lead Vocals
Mark Clarke: Bass Guitar, Vocals
01) Intro
02) Downhills and shadows
03) Take me back to doomsday
04) Tanglewood '63
05) Lost Angeles
Time: 48m19s
Sound: B/B+
As stated, this recording has been mastered from a needledrop. Before doing this, I cleaned the vinyl carefully using anti-stat. The record looks as if it was hardly played before I owned it. The grooves are not precisely centered around the hole, causing the needle to drift about. Sometimes you can obviously hear this. The sound has hardly any frequencies above 10kHz (except for the scratches on the vinyl). It's mono, but I left the left and right channels intact. If you're expecting a high quality soundboard recording, this is not it...
But having said that, it is listenable enough and also quite hard to find. The first track sounds the worst, after that the sound gets better.
Pubblicato da EDGE a 17:52