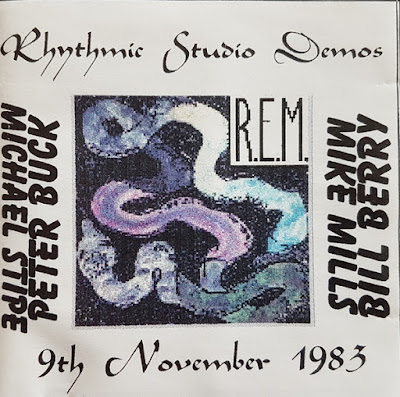 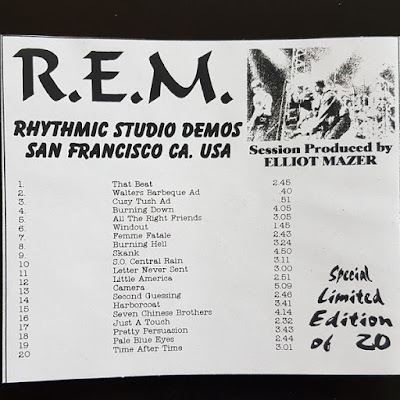 The only song on this recording whose source I would question is That Beat. Michael can clearly be heard talking to someone called 'Don' in the control room. This would almost certainly have been Don Dixon, the co-producer of their first two records. The Rhythmic Studios were produced by Elliott Mazer not Don Dixon so... hmmm... that suggests that this may come from a different session than this one.

This is from UNCUT Magazine:

Mazer had first met [Peter] Buck, a long-time Young fan, at R.E.M.'s show on June 20, 1983 at the Keystone Berkeley, California. He remembers the sessions: 'The band called me as they wanted to demo some tunes and Mitch [Easter] was not in town. The band set up in the studio and when we had a sound, they started to play. Everything was done live to 2-track stereo. One take per song. They played a tune and, if they got through it, they moved onto the next one. It was intense fun'. Among the sessions were three covers -The Tokens' 'The Lion Sleeps Tonite', and 'Pale Blue Eyes' and 'Femme Fatale' by The Velvet Underground- that the band 'played to get sounds and warm up', says Mazer. 'We might have done one playback, if at all', he continues. 'They needed to record demo versions of these tunes'. The sessions never officially saw the light of day, though they were leaked online. When asked what happened to the tapes -and why the sessions weren't included on the forthcoming 'Reckoning Special Edition'- [R.E.M. manager, Bertis] Downs admits no-one's entirely sure where they are: 'They could be dust, or they could have been mislabelled and are sitting in a locker somewhere'".

With the probable exception of That Beat, these were originally recorded live to 2-Track. They were circulating among collectors on cassette for a while and these are probably originally sourced from one of those unknown generation tapes. They were compiled onto CD-r and then extracted to flac using Exact Audio Copy. Everything else was done on TLH V 2.5.0.
Pubblicato da EDGE a 19:10