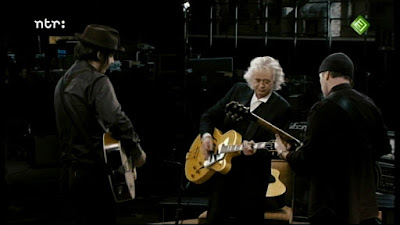 Info (taken from Wikipedia)
The film documents the varied playing and recording styles of guitarists Jimmy Page, The Edge, and Jack White.

Page's history with guitar traces back to his childhood when he played in a skiffle band. After desiring to do more than play pop music, Page "retires" from guitar playing to attend art school. He later revives his music career as a session guitarist, only to be discouraged by the realization that he is playing others' music and stifling his own creativity. At that point, Page begins to write and perform in the bands The Yardbirds and Led Zeppelin. Page discusses the skiffle and blues music that influenced him at the time. For many of Page's scenes, he is seen visiting Headley Grange, where several songs from Led Zeppelin IV were recorded, and in one scene, explains how the distinctive drum sound from "When the Levee Breaks" was achieved from the acoustics of the house.

The Edge's history with guitar traces back to building a guitar with his brother Dik and learning to play. In the film, he visits Mount Temple Comprehensive School and recalls forming U2 in his childhood. He also demonstrates his playing technique, in how he eliminates certain strings from chords, as well as his use of echo and delay effects to "fill in notes that aren't there". He also discusses his purchase of his signature guitar, the Gibson Explorer, in New York City and the punk music that influenced him. In other scenes, he plays early demo tapes of "Where the Streets Have No Name", discusses his inspiration for "Sunday Bloody Sunday", and spends time experimenting with guitar effects for the riffs to "Get on Your Boots".

Jack White traces his musical background to his childhood in a rundown neighborhood of Detroit. Living with two drum sets and a guitar occupying his room and sleeping on a piece of foam due to taking out his bed for more room for his music, White struggled to find a musical identity, as it was "uncool" to play an instrument and his nine siblings all shared a musical propensity. His strong interest in blues and roots music opposed the hip hop and house music popular in the predominantly Latino south Detroit neighbourhood at the time. White eventually finds a niche in a garage rock band called The Upholsterers while working as an upholsterer, which paves the way for his future bands The White Stripes and The Raconteurs. White's philosophy is to limit and challenge himself in various ways to force creative approaches to recording and playing.

The touchstone of the film is a meeting of the three guitarists dubbed "The Summit". In these scenes, the three guitarists not only converse about their influences and techniques, but they also play each other's songs together, showing each other how to play "I Will Follow", "Dead Leaves and the Dirty Ground", and "In My Time of Dying". The film concludes with the men playing an impromptu cover version of The Band's "The Weight" on acoustic guitars. 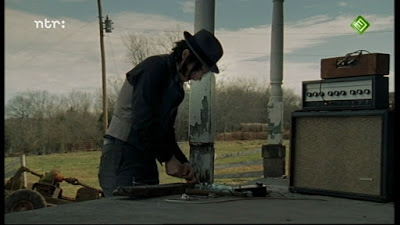 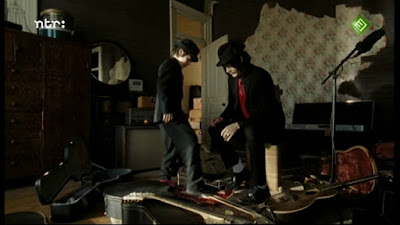