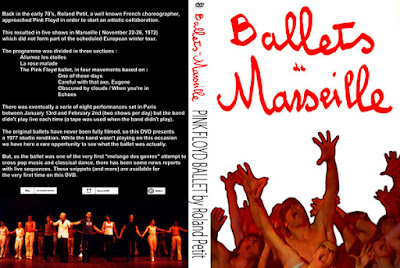 Pink Floyd's flirtation with the cultural establishment culminated in the autumn of 1970 with French choreographer Roland Petit's proposed ballet, based on Marcel Proust's Remembrance of Things Past and featuring Rudolf Nureyev plus sixty other dancers, which was to have incorporated Floyd compositions performed by the band and a 108 piece orchestra. "Pretty amazing!", Gilmour gushed to Melody Maker. "Something nobody in our field has ever done ..." "Freakier and freakier," announced Rolling Stone. "Pink Floyd is now into ballet ...".

Prior to their lunch in Paris on 4 December with Petit, Nureyev, and Roman Polanski (who hoped to direct a film of the ballet), the Floyd dutifully attempted to familiarize themselves with Proust's eight-volume classic. All found it slow-going, especially Dave, who gave up after eighteen pages. Only Roger managed to struggle past the first book. By the time Waters, Mason, and Steve O'Rourke got to Paris, however, Petit had decided to set aside Proust in favour of The Arabian Nights. "Everyone just sat there drinking this wine and getting more and more drunk," Roger recalled, "with more and more poovery going on around the table, until someone suggested Frankenstein and Nureyev started getting a bit worried... I was just sitting there enjoying the meat and the vibes, saying nothing... And when Polanski was drunk enough he started to suggest we make the blue movie to end all blue movies, and then it all petered out
into cognac and coffee and we jumped into our cars and split. God knows what happened after we left !".

Over two years later, Roland Petit finally would choreograph a Pink Floyd ballet, but without Nureyev, Polanski, or the 108-piece orchestra. A set of five live shows was performed in Marseille (November 22-26, 1972), that did not form part of the scheduled European winter tour.
The programme was divided in three sections :
- Allumez les etoiles
- La rose malade
- The Pink Floyd ballet, in four movements based on:
One of these days
Careful with that axe, Eugene
Obscured by clouds / When you're in
Echoes

The original ballets have never been fully filmed, so this DVD presents a 1977 studio rendition. While the band wasn't playing on this occasion we have here a rare opportunity to see what the ballet was actually.

However, as the ballet was one of the very first "melange des genres" attempt to cross pop music and classical dance, there has been some news reports with live sequences. These snippets (and more) are available for the very first time on this DVD.

This DVD was received from an anonymous fan without any info about the lineage. However this is by far the best quality we've been able to get for this ballet filmed in TV studios.
Colours are superb and there are 2 audio tracks available: an amazing stereo remastered soundtrack and the original mono TV soundtrack.

The tracklist is:
1. One Of These Days
2. Careful With That Axe, Eugene
3. Obscured By Clouds
4. When You're In
5. Echoes

There are also very interesting bonus snippets, showing the Floyd rehearsing OOTD with the dancers, and some other snippets taken from rehearsals and live performances with the Floyd and the Ballet of Marseille. Apart from a short extract of CWTAE, this footage never surfaced previously! There are even more bonus with extremely rare documents related to the Ballet and Roland Petit.

Last but not least, the DVD includes English and French sub-titles!

[1] text sources:
"A Saucerful Of Secrets - The Pink Floyd Odyssey"
by Nicholas Schaffner
"In The Flesh" by Ian Russel & Grenn Povey